Ketchum's Beginnings in the Bigfoot World

The most controversial piece: The Justin Smeja "Bigfoot Steak"

Who is Casey Mullins?

It is in the opinion of the editors here at Squatchdetective.com, that no coincidence there is a Michigan connection to Casey Mullins and to the Ketchum spokesperson who replaced Sally Ramey, Robin Lynne aka "Robin Lynne Forestpeople." The Twitter account and the "FAZE"  peer review paper, and the alleged previous owner of the Journal, was all a hoax. The Twitter account reeks of a sock (or disguised) account.
Whatever the case, Ketchum did not get published in a journal as she originally claimed to have been and when it was discovered she owned the journal, a Casey Mullins cover story was created which proved to be more elusive than Bigfoot itself.

Ketchum also called for a press release prior to publication which is a breaking of the "Robert's Rules of Order" in science apparently. 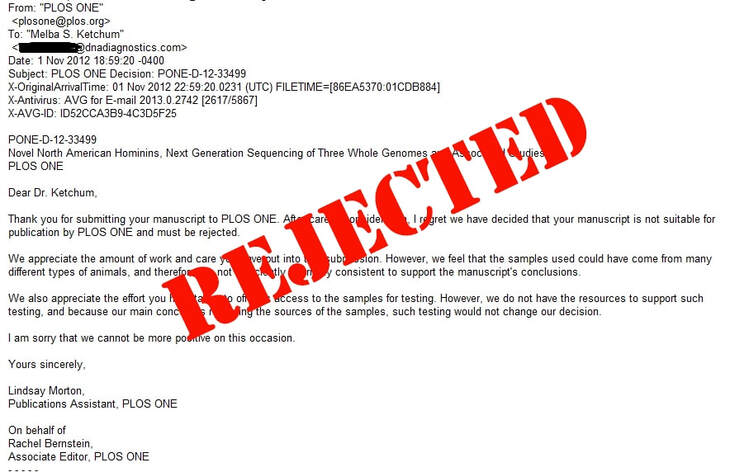 "Regarding the origins of DeNovo, Ketchum said on the day of the paper release that an unnamed journal had accepted the paper after peer review was completed, but their lawyers advised them not to publish due to the disreputable topic. Instead of continuing to shop the paper to other sources, she decided to acquire the rights to this unnamed journal, suspected to be the Journal of Advanced Multidisciplinary Exploration in Zoology.

The Ketchum Report: The results (UPDATED 2021)

The inclusion of the Erickson Project

Other quotes on the Ketchum Study

There is much much more that can be shared here. Be when does enough become enough to see where the study was going from the get go. The Smeja Case, The Erickson Project follies which leads to the Carter Farm, the alleged ORV habitation, the Matilda photos. The core of the matter is what the scientists have stated about the study. Prior to the release of the study and even samples being tested the people getting involved with the study had the beliefs being extolled prior to any evidence, just look at Ketchum's spokesperson's moniker "Robin Lynne Forestpeople".

​To me what the study represented was a blind look to the real facts of contamination and misidentification based on an improper primer used in the testing. (Ketchum provided the copyrighted primer to the labs for third party testing.) To those in the know in the community prior to the announcement or Dr. Burtsev's leak, we knew what the outcome was going to be. Contradictory to what Ketchum stated that "Angel DNA" moniker was used by the ignorant, the fact is the word "Angel DNA" was being thrown around by people in her camp. I know this, because one of the people on the panel at the presser was my good friend and there was also a second source of the use of that word.
While this may not be completely a hoax or a sham, though some may believe it is, it becomes one of the rare cases where propagation of the disproved study becomes the hoax. Ask any geneticist mentioned above, and we left many others out, it was contamination or a bad primer and overlooking the real results either out of ignorance, misinformed education or lastly and more dubious; with purpose.
​
For the lack of ethics in the study and appearing to fit the evidence to the hypothesis rather than fitting a hypothesis to the evidence, in setting up a cover story about the Journal purchase including the use of a sock account to provide evidence, and today extolling pseudo-science and attacking critics in an unscientific and non-conversational manner, ​the Ketchum Study is included in the Hall of Shame.